This spring, popular retailer Vineyard Vines teamed up with the legendary American sportscaster Jim Nantz for a limited-edition golf collection. The clothing line featured a selection of comfortable, sophisticated pieces for the course, clubhouse, and beyond. 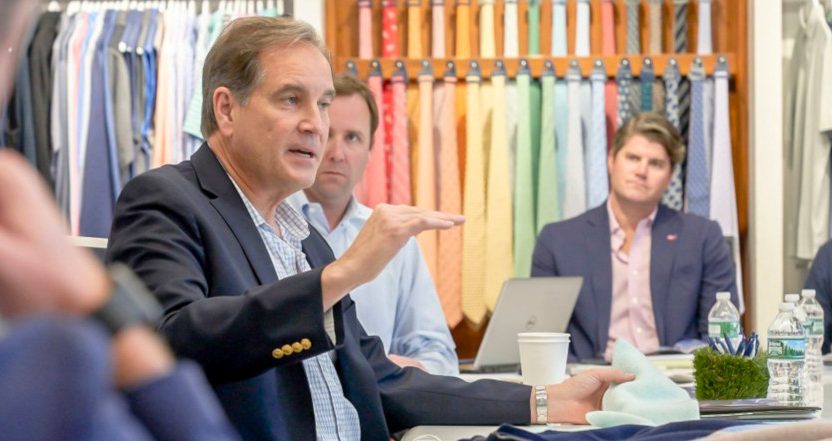 A lifelong golfer, Nantz played for the Houston Cougar’s men’s golf team, rooming with professional golfers Fred Couples and Blaine McCallister. The majority of Nantz’s career has been with CBS Sports serving as both the voice of golf and football. Outside of athletics, Nantz also launched a private wine label The Calling, in refence to Nantz’s calling of the Masters Tournament.

While Nantz was busy launching his career in the west, two brothers Shep and Ian Murray were busy launching a brand in the east that would suit “a cross between Warren Buffett and Jimmy Buffett”. In 1998, Vineyard Vines was founded on Martha’s Vineyard, Massachusetts. In 2007, Vineyard Vine’s was placed on Inc. Magazine’s list of 5000 fastest-growing businesses in the US. Currently, Vineyard Vine’s operates in 70 stores, 19 outlets, and 97 retail locations worldwide.

Vineyard Vines and Jim Nantz is the latest celebrity partnership brands have utilized to increase sales. Other successful examples of celebrity collaborations include Tommy Hilfiger x Zendaya, Selena Gomez x Coach, and Fenty by Puma. Celebrity collaborations are a great way to increase awareness and drive sales for a brand. It is no secret that people, especially young people, idolize celebrities. They want to wear what the celebrities are wearing.

Although Jim Nantz is a well-known face in the sports industry he’s an underrated endorser in the entirety of the public sphere. Not everyone knows his face, but they know his name and voice. By collaborating with Nantz, Vineyard Vines is able to reach a core audience of not only football and golf fans but anyone that has happened to watch a CBS sports broadcast at some point or another, because his voice is so recognizable.

Vineyard Vines will have to get creative in how they activate their newest partnership. Jim Nantz doesn’t have a strong social media presence so he won’t be able to reach the market this way. One could argue the signature line with Jim Nantz’s name stapled to it is the activation itself. By directly associating a line of products with a well-known public figure Vineyard Vines will be able to draw more traffic to that line of clothing.